During World War II, there were rumors that an abandoned mine used by the Wehrmacht contained treasure. The entrance was sealed after being blown up shortly before the war ended, and it remained that way for decades. Despite this, we were determined to discover if the rumors were true. In this story, we'll share the journey of getting inside and what we found.

Snow covers the coniferous forests of the quiet hillsides. It is spring 1945, German history writes the last days of their great winter. Below, between steep slopes, a convoy paves its way through the narrow valley. Passes a village, shrouded in black slate. Where the miner once took his daily journey, the convoy disappears between firs and pines. A series of thunderclaps breaks the silence. Today one of the old people from the village near by, still tells the story of that long past day. The young boy had to wall up the passage fifty meters into the tunnel. But the chance to glimpse into the darkness behind that point, and what would happen there after he was finished, he did not get.

The steel rope crunches like a guitar string during tuning. Nobody speaking. With each pull the tension rises. The rattling of small pebbles on our helmets can be heard sporadically.

October 2011, during a routine terrain reconnaissance, we step across a lonely mine dump in the forest. The age of the vegetation indicates that the site is abandoned for at least 50 years. Curiously, we start looking for the corresponding mine entrance. Even after a few hours of searching, there are no signs of a former access. If a tunnel is naturally broken, at least one ping can be detected. In this case, the former access must have been intentionally made unrecognizable. The curiosity rises. After further research in various archives and relevant literature, we find some traditions. A miner, who has seen several Wehrmacht trucks heading in the direction of the pit and who has then excavated a tunnel, residents who tell of unexplained explosions at the same time, and the report of a ministry worker who could not find any traces of the mine entrance after the war. Everything points to the fact that since 1945 the upper entrance of the former slate mine has been destroyed and has not been entered since then. 68 years after the last man left the mine, we set off on the way to open the door to the hitherto unknown galleries and chambers. During the exploration of the terrain, we discover, hidden in the thicket, a sinkhole below the mine dump. It gives access to another lower sole of the mine. In the end of one of the tunnels we find an original preserved crate with label from 1938 and remains of ammunition crates. A possible reference to military activities? The excavation chambers of this sole reach a height of up to 20 meters. Their celling’s and walls are riddled with weather shafts which could be connected to the upper sole. Most of them empty into the chamber high above our heads and are not reachable. However, one shaft opening is located directly above an eight meter high wall made of slate slabs. We are able to climb up to the opening. Unfortunately, we soon discover the shaft is blocked after an additional two meters by a steel beam and masses of overlying rock. Its removal could create a possible pass. But the moving tons of gestated rock could also bury everything under itself. After appropriate preparation and safeguarding, we try to use a cable pull to remove the beam. The beam consists of an old rusted rail as used in narrow-gauge gullies and also in the mining industry. As our cable pulling device has a pulling force of four tons, we anticipate to be successful quite quickly. Dull sounds echo from the darkness. There are several small stones that trickle down on our helmets. We believe we stand right before our goal. But silence follows. The carrier continues to stand. Two further attempts to create access via the shaft remain unsuccessful. So we decide to dig up the submerged mine entrance to the upper sole itself.

In a further initiative several cubic meters of earth and rock are put aside. After two days, a small gap gives the first look inside. Water is reflected in the first ray of light that pierces through the darkness. The water masses accumulate up to the ceiling of the former entrance at the bottom of our excavation. We start digging a trench through the soil in front of the entrance, to drain the water from the mine. After more than half a century, however, the gravel covering the entrance is heavily compressed. Progress comes slow and with a lot of sweat. Another day and night of digging passes, but the way to the inner mountain is still blocked. For today the mountain keeps its secret, but we will return. 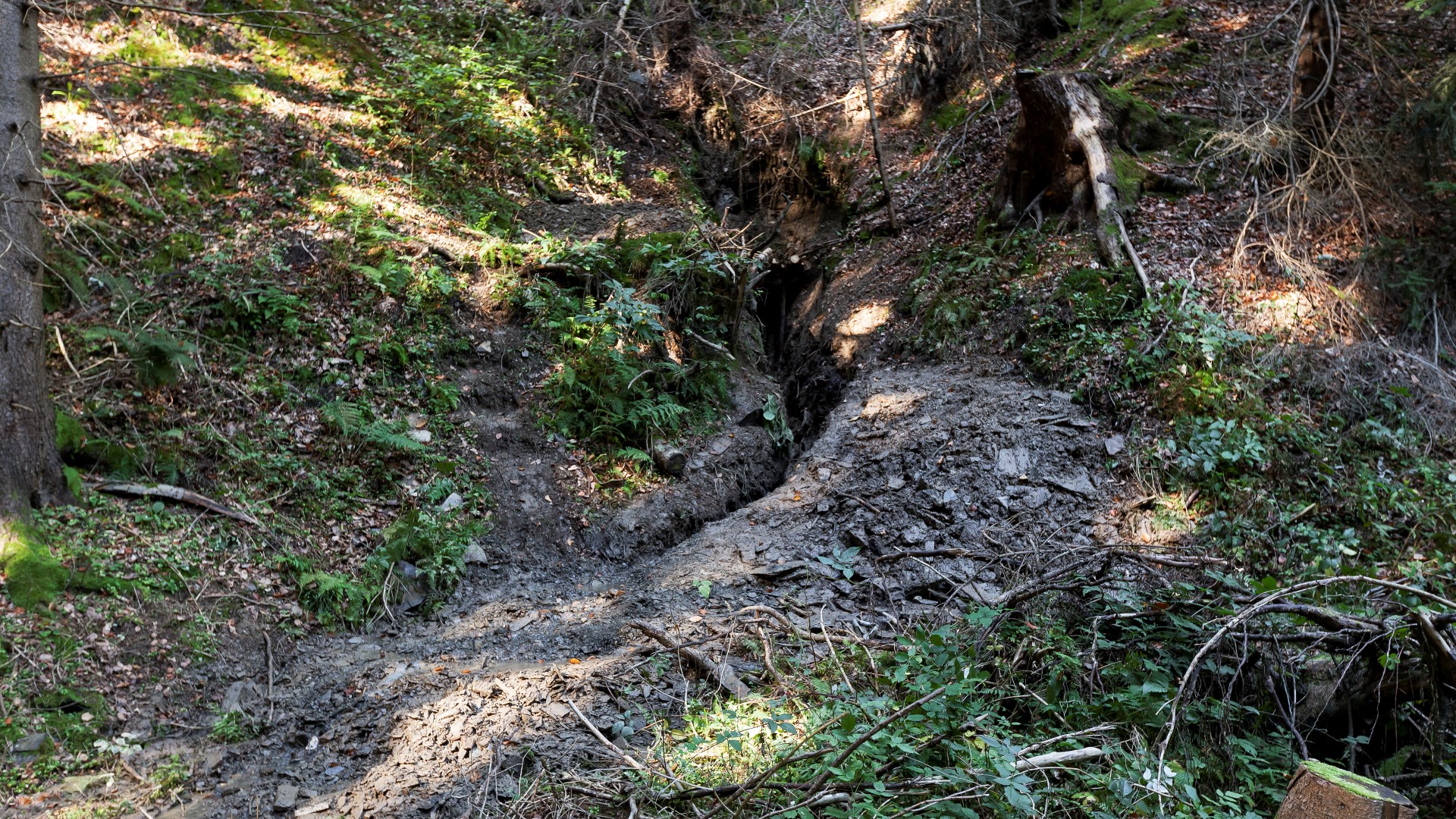 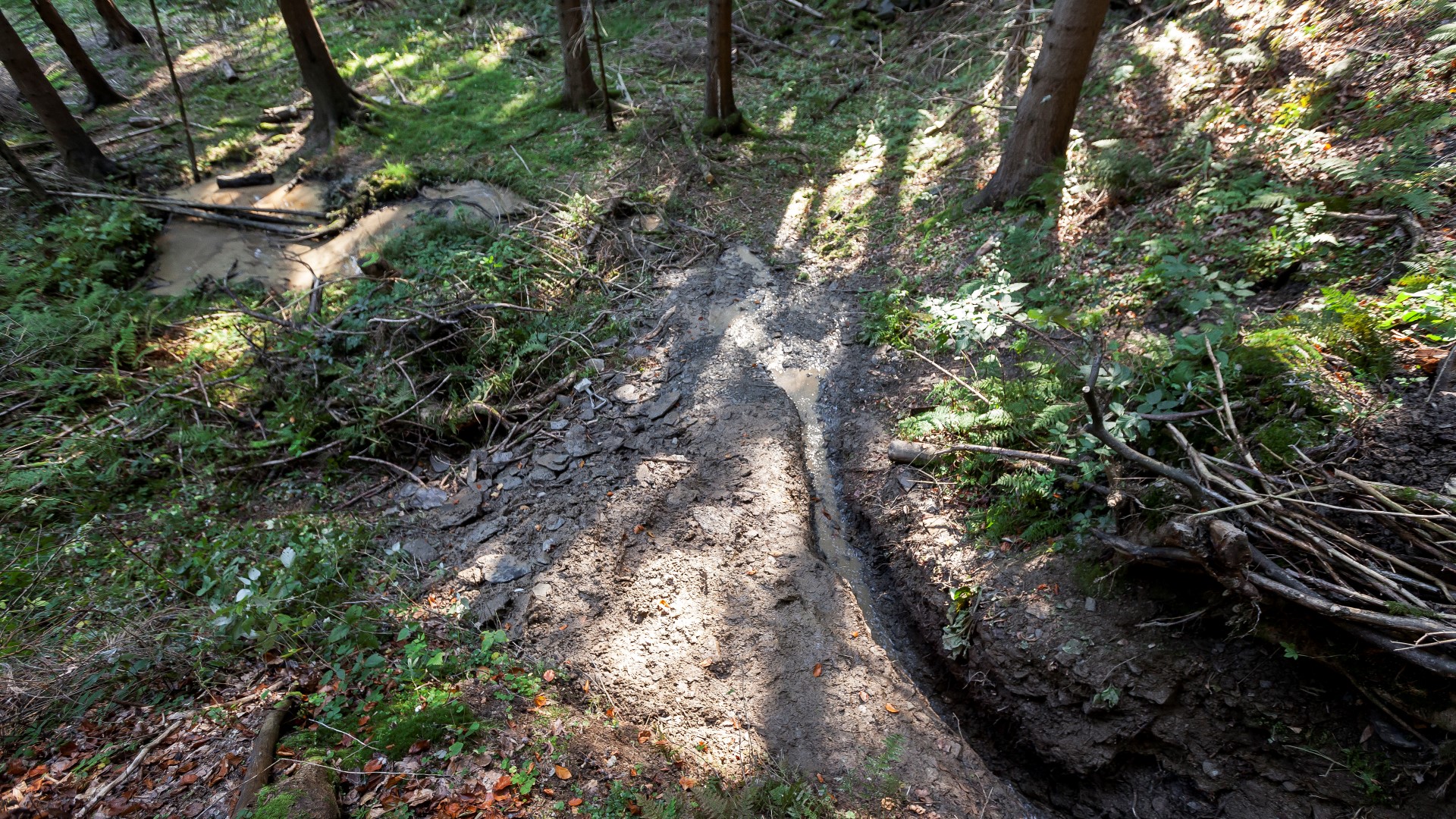 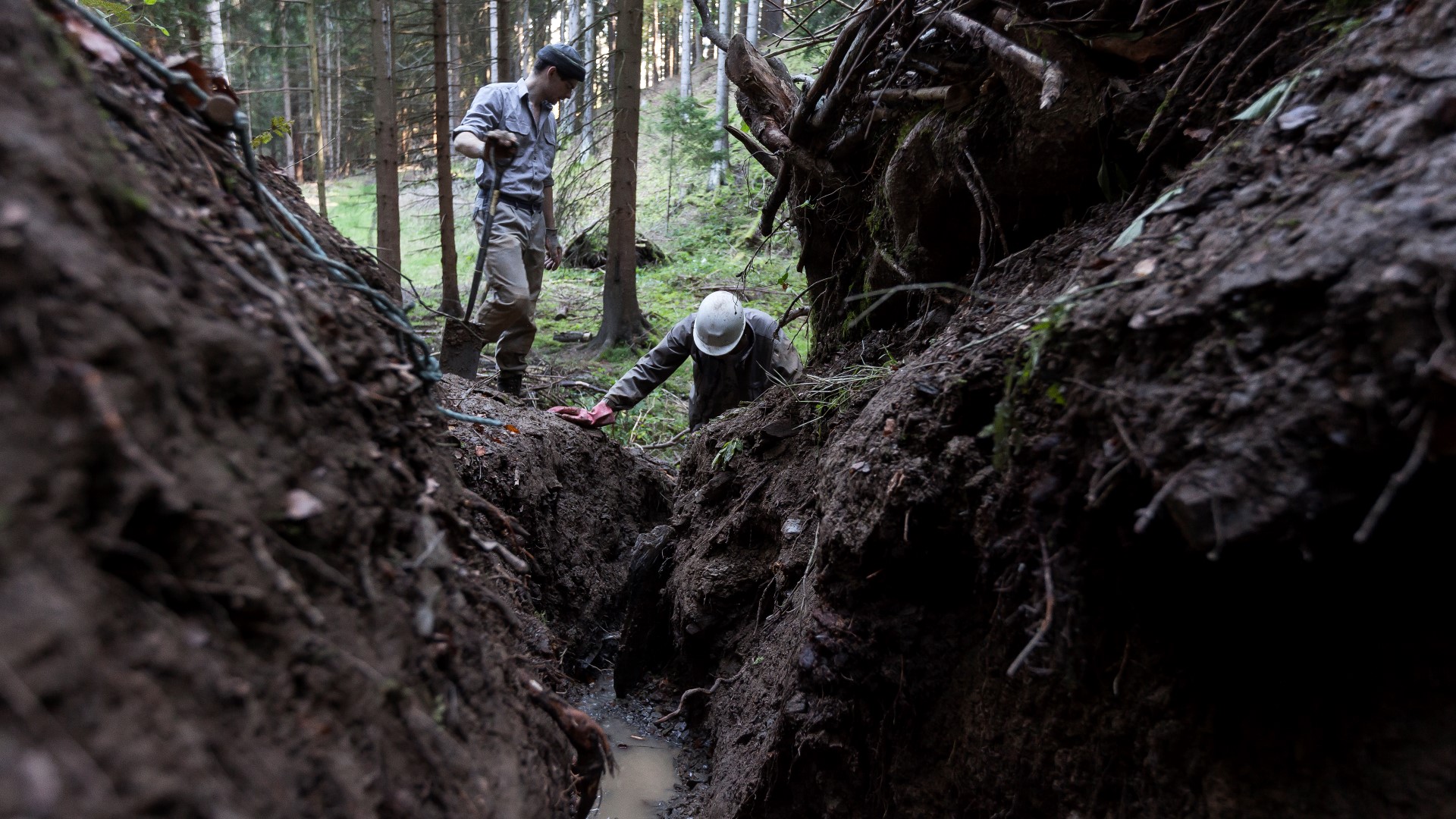 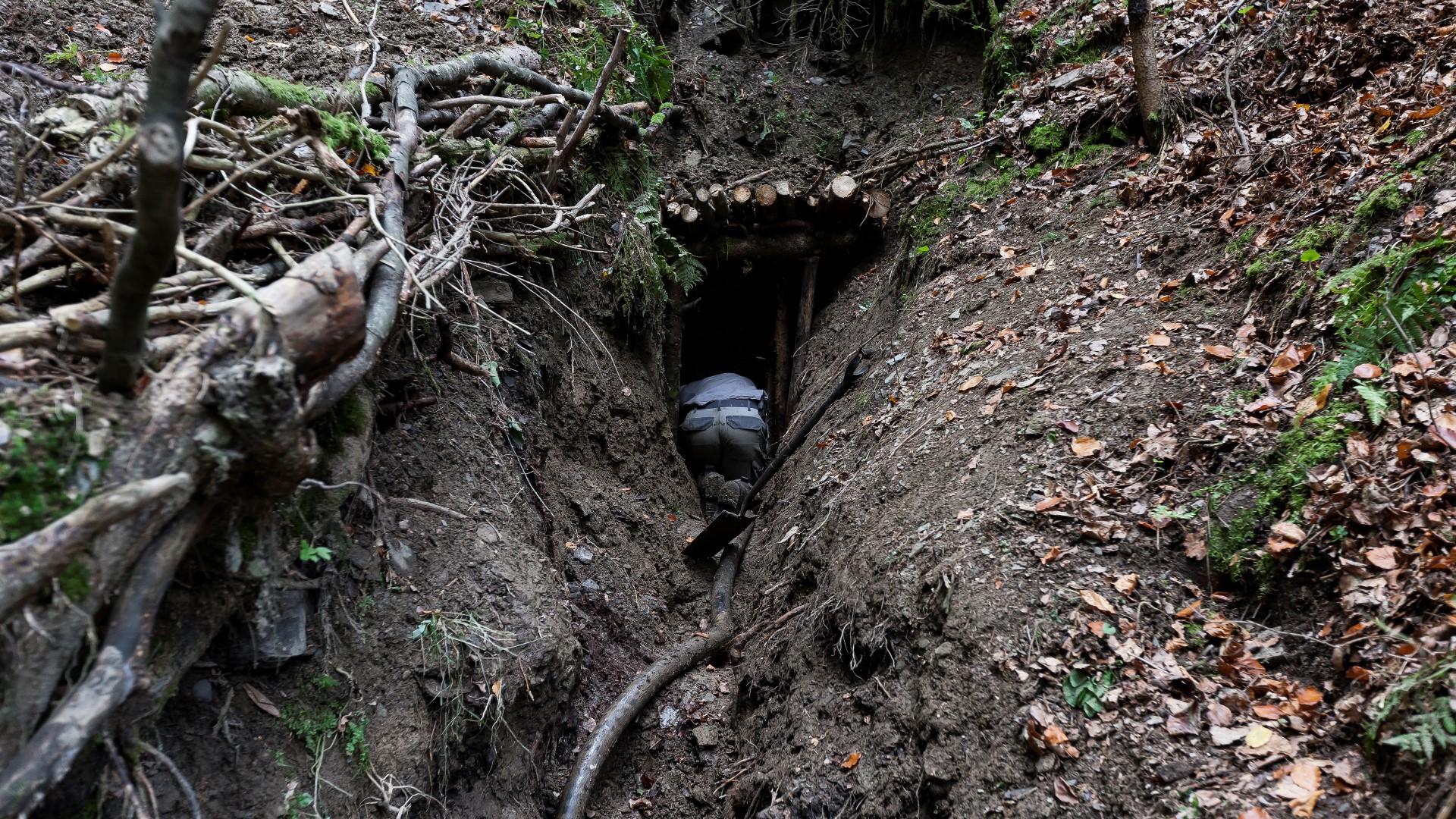 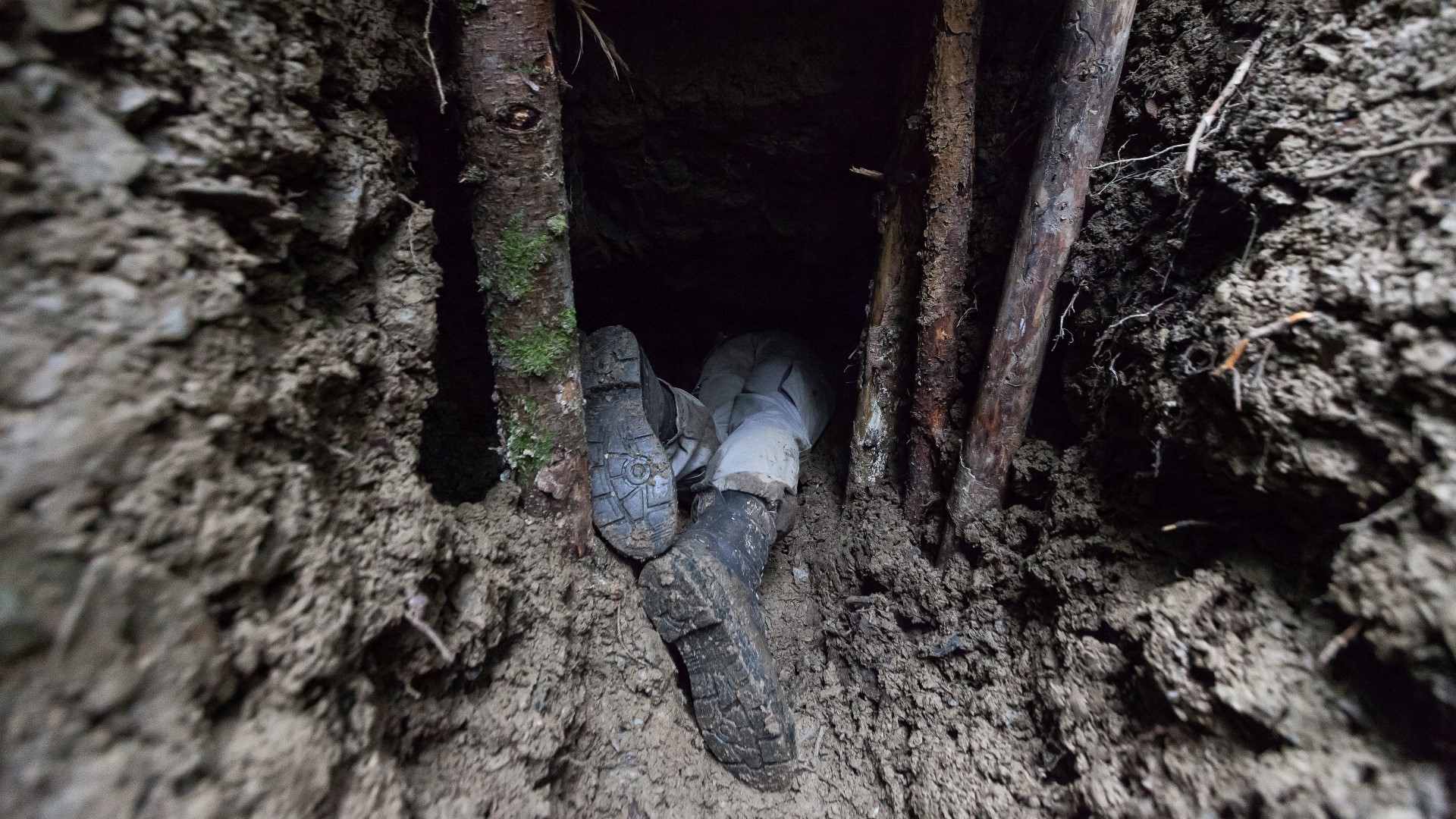 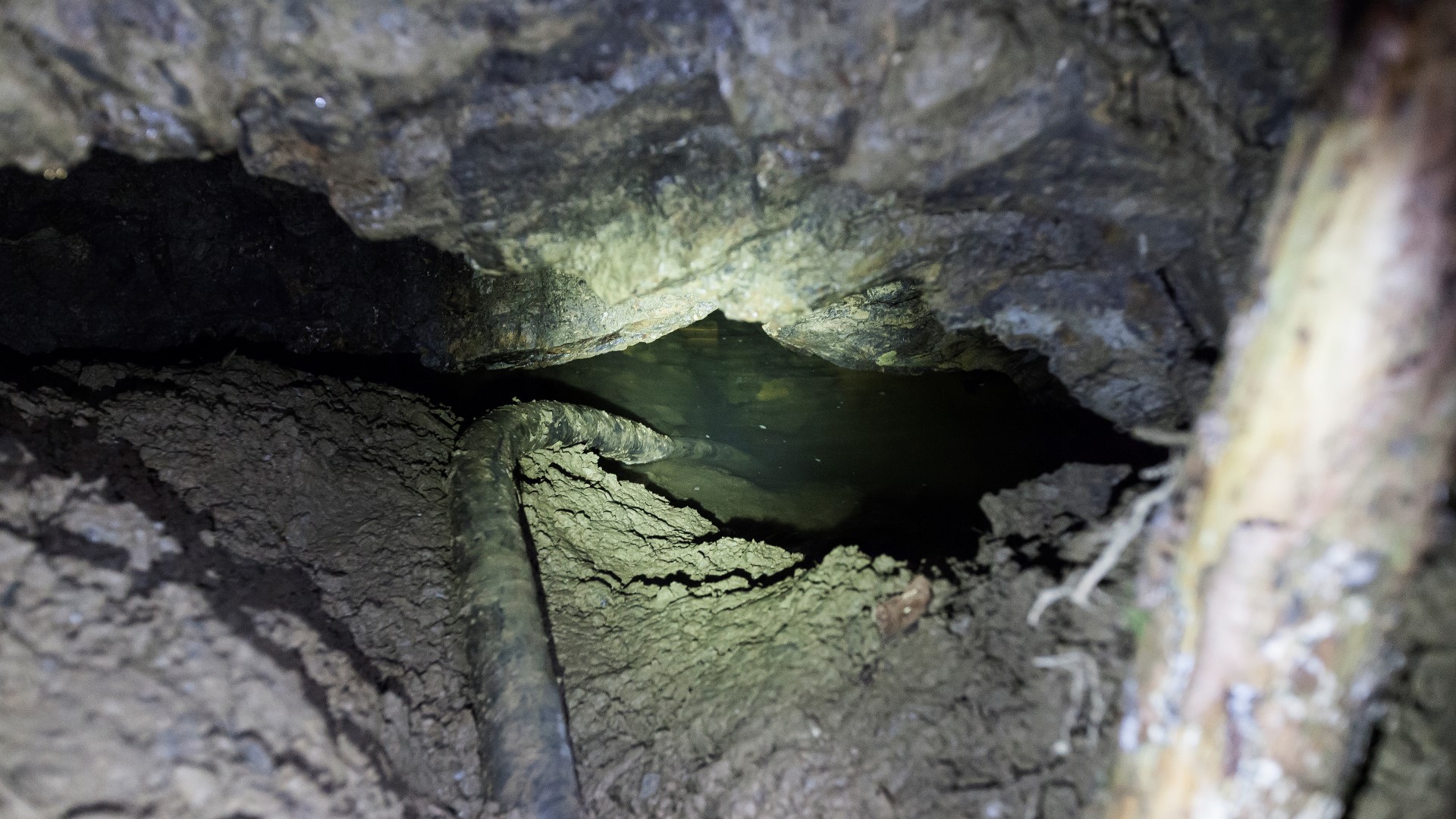 Three months pass before our next approach begins. A motor-driven water pump is used. In the column between loosely suspended slate blocks and rotten beams we lay the pipes. To start the pump, the pipe must be filled with water first. Every time someone has to creep into the gap to close the inlet of the hose. The loud engine of the pump does not only cause the air to quake there. However, the submerged inlet must be opened immediately after switching on. The pump has been working for nine hours. The water level drops by just two cm. Impossible to drain the water within the scheduled time of two days. Also this time we have to withdraw unsuccessfully. But the more difficult and more harsh the project becomes, the more mysterious the hidden and the unknown in the mountain becomes for us. Our desire and motivation to reveal the mountains secrets rises even more. The next time we choose a much more powerful pump with an hourly power of min. 60,000 L. Five hours pass, but the water level drops only a few cm. The water still stands up to the celling of the tunnel. With every hour the water level keeps up its height our hopes fall. Slowly the darkness breaks in. Somebody climbs a last time in the gap to measure the water level. Suddenly, a breath draws across his face. It is the warm breath of the mountain. 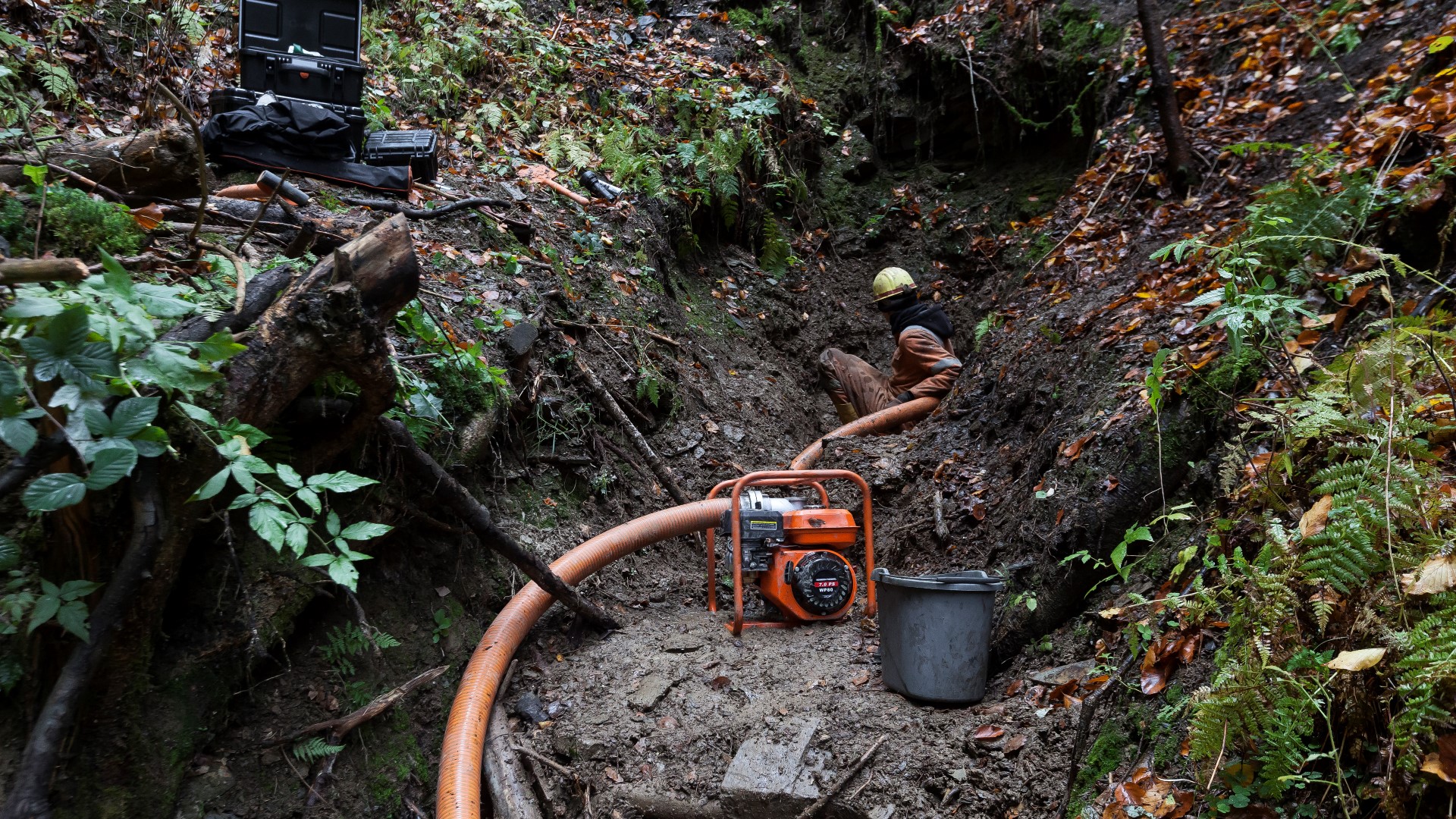 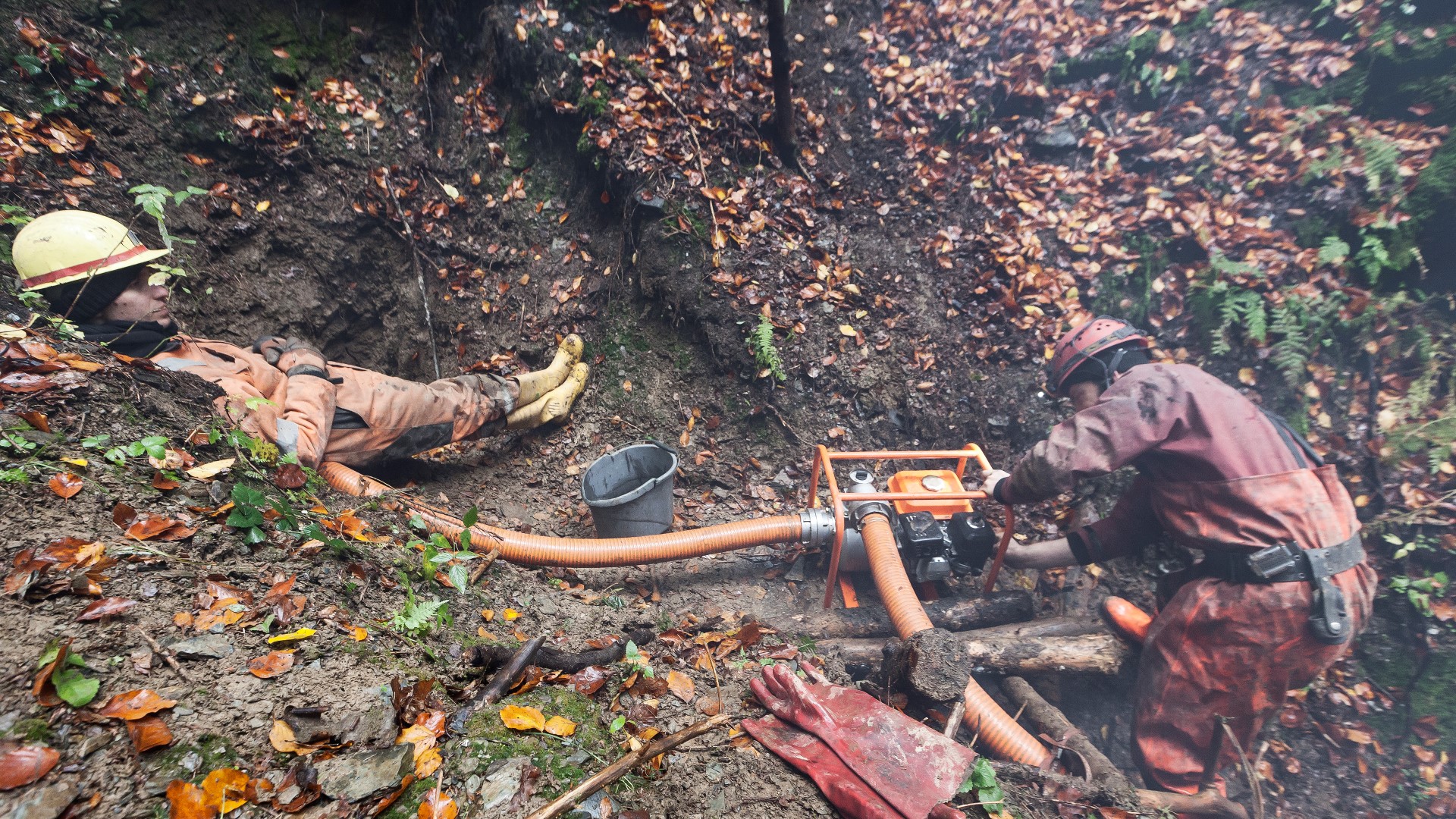 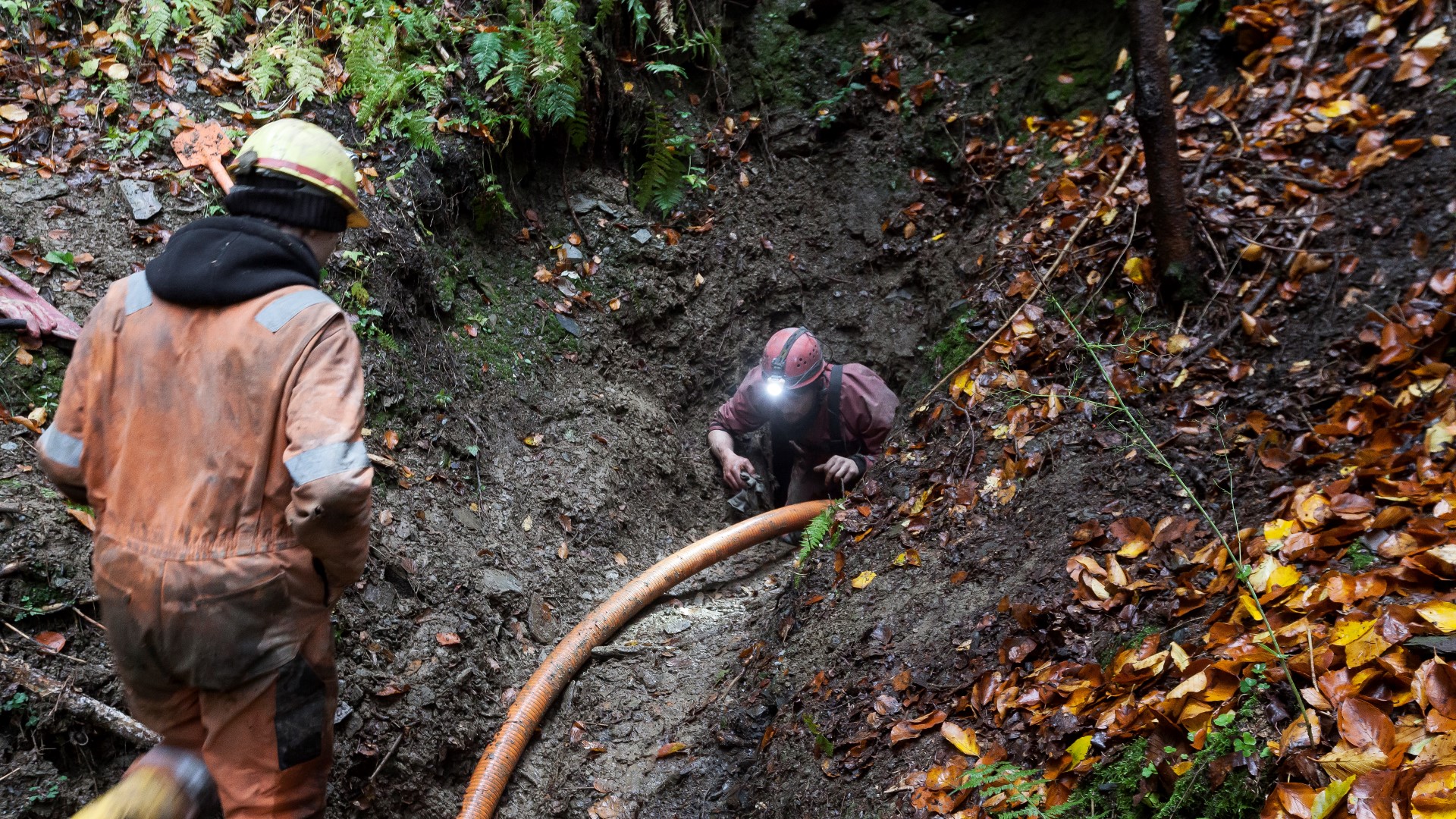 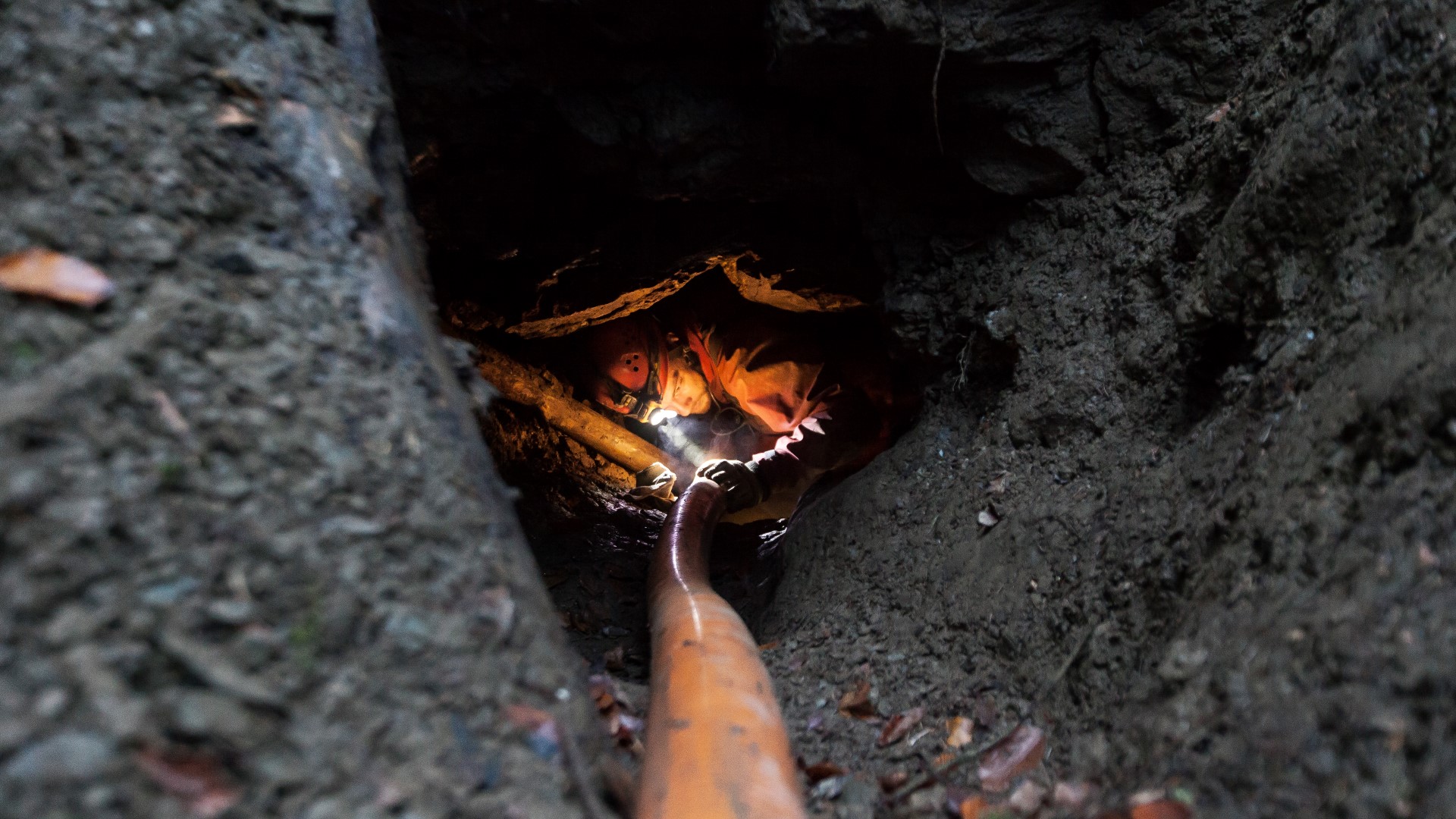 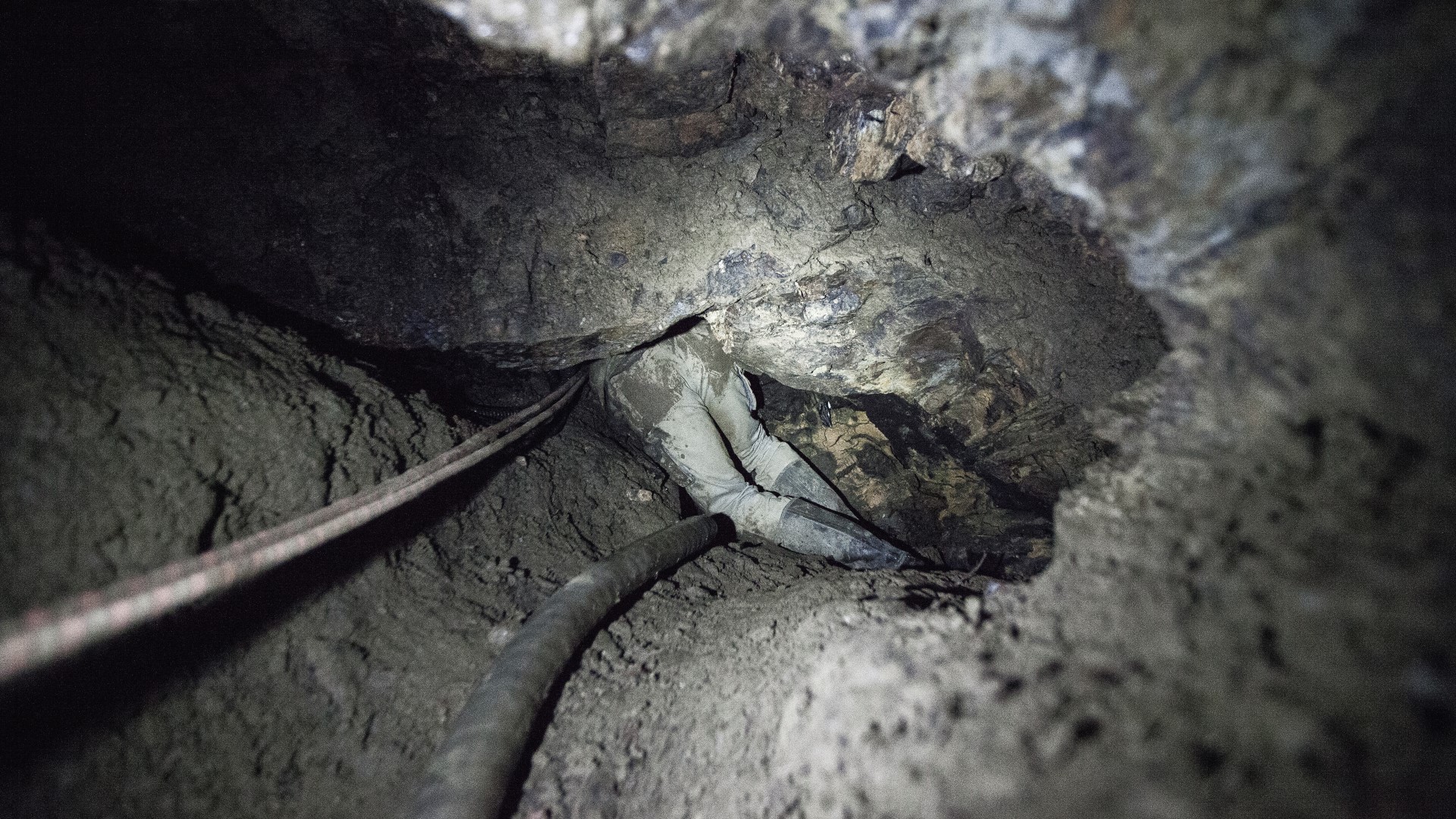 The water level has now fallen and gives a view into the interior of the tunnel. The last seal is broken. After 70 years, the mountain opens its doors for the first time. At the end of a 200-meter-long tunnel, a portal of 20-meter-high rocky walls rises. We suddenly find ourselves in a huge hall of the size of a half football field. On the right hand, in thick white letters, a painted miner’s greeting from long past days welcomes us.

A labyrinth of halls, corridors and chambers reaches the depths of the blue rock several hundred meters away. Although for more than half a century no mortal entered this soil, peculiar shoe prints cross the soft mud ending up in nothingness. Your mind tricks you into hearing the steps of the miners who left this traces behind. A little further is a black leather shoe with a studded top, almost frozen to stone. Between coarse gravel and debris untouched tools are rusting in the wet air. Left decades ago, they slowly become one with the rocks surrounding them. There is also the winch on the die, with which men lifted the rock from the valley for decades. The chains with their seats on which miners had drilled holes still depend on the ridges. The cool breath of the long-drawn-out old man can almost be felt in the neck. 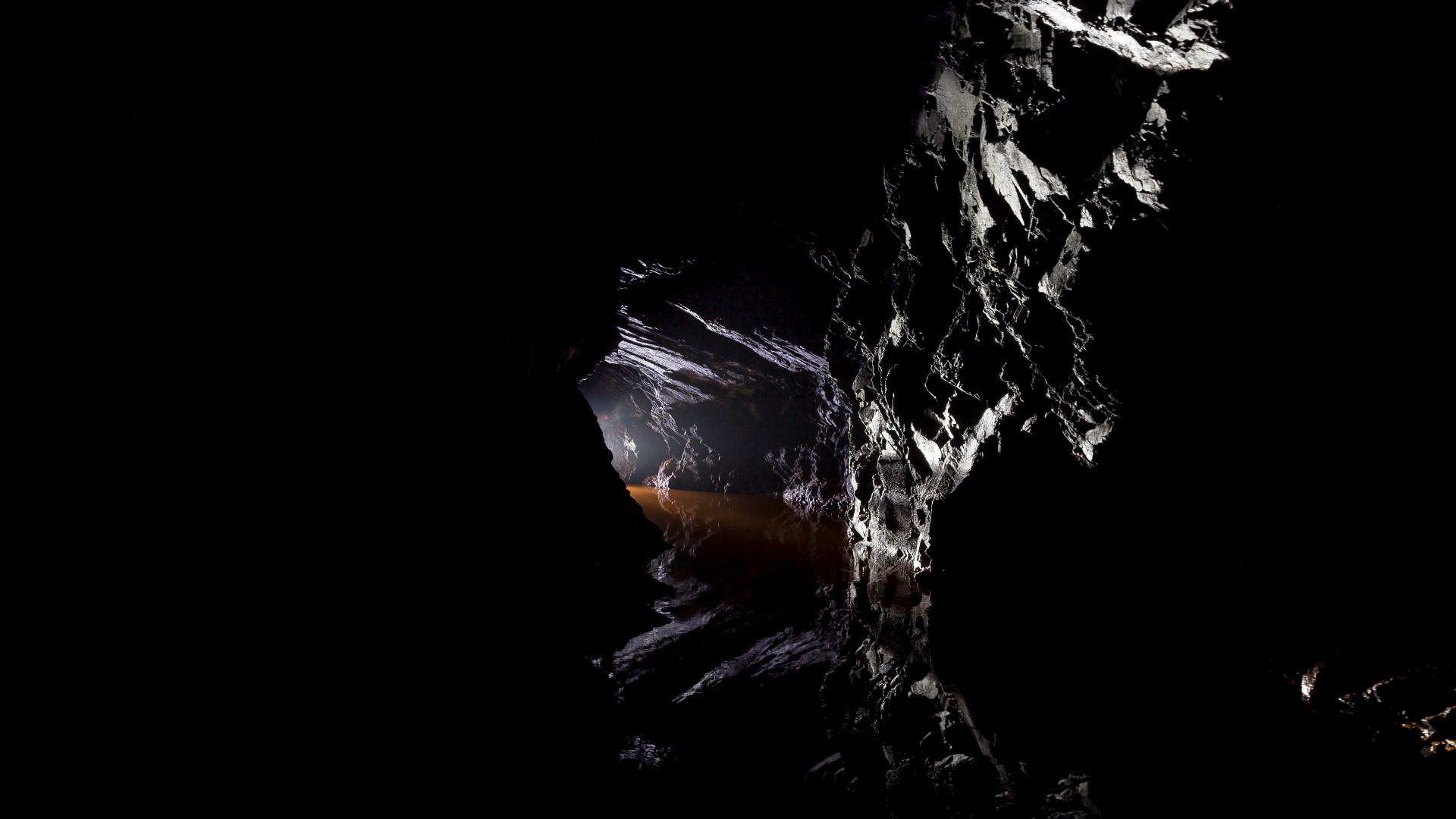 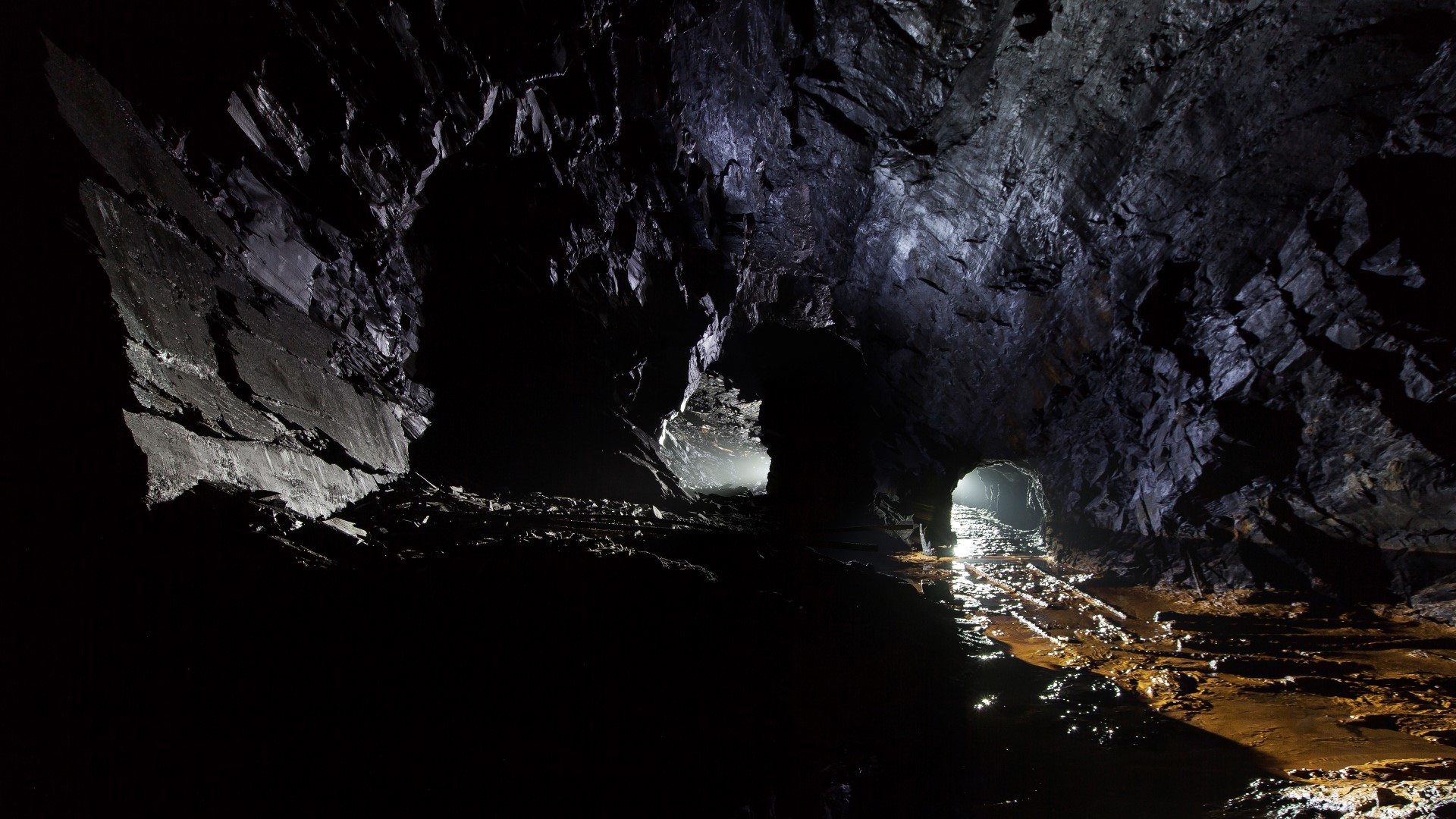 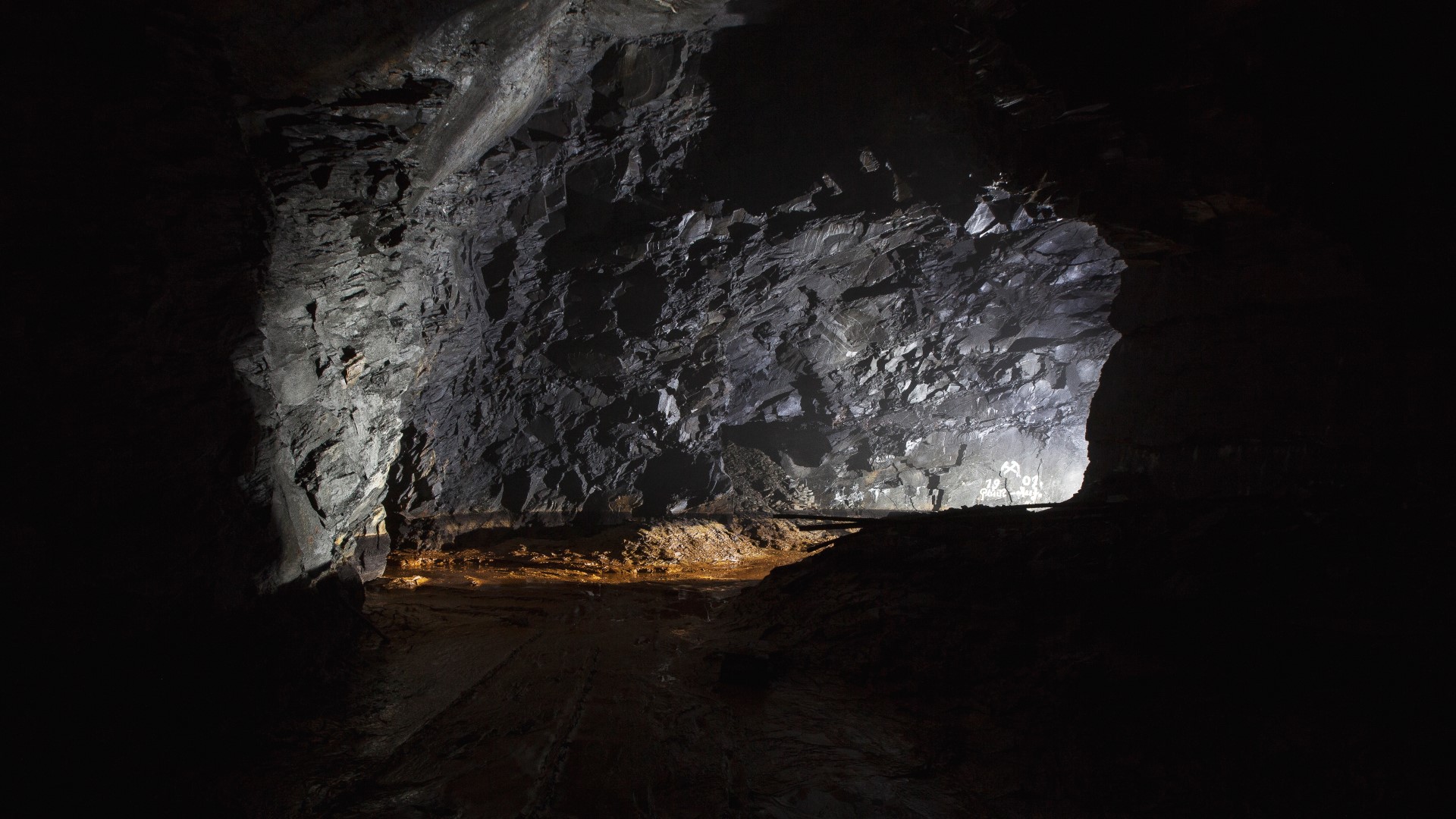 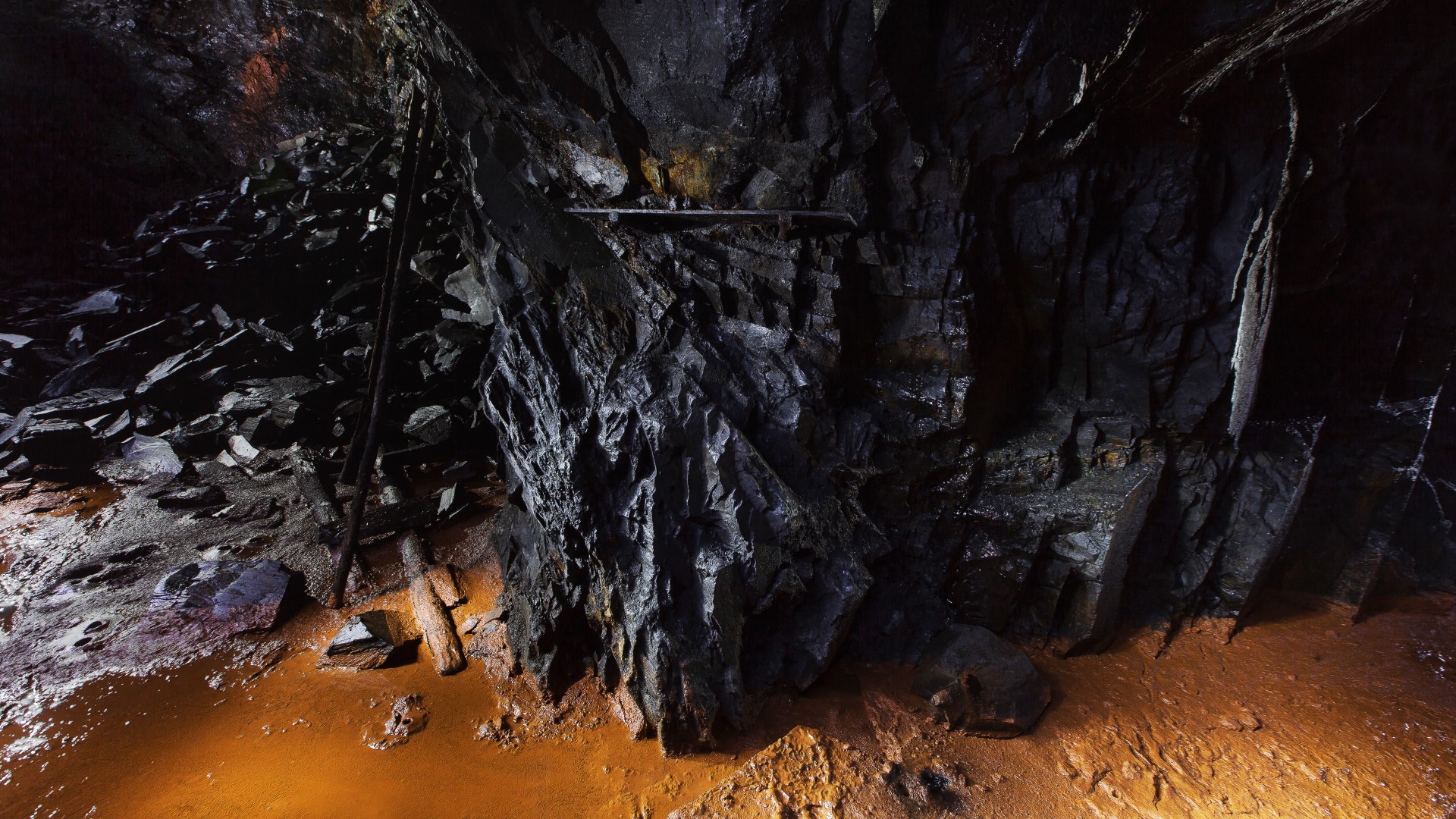 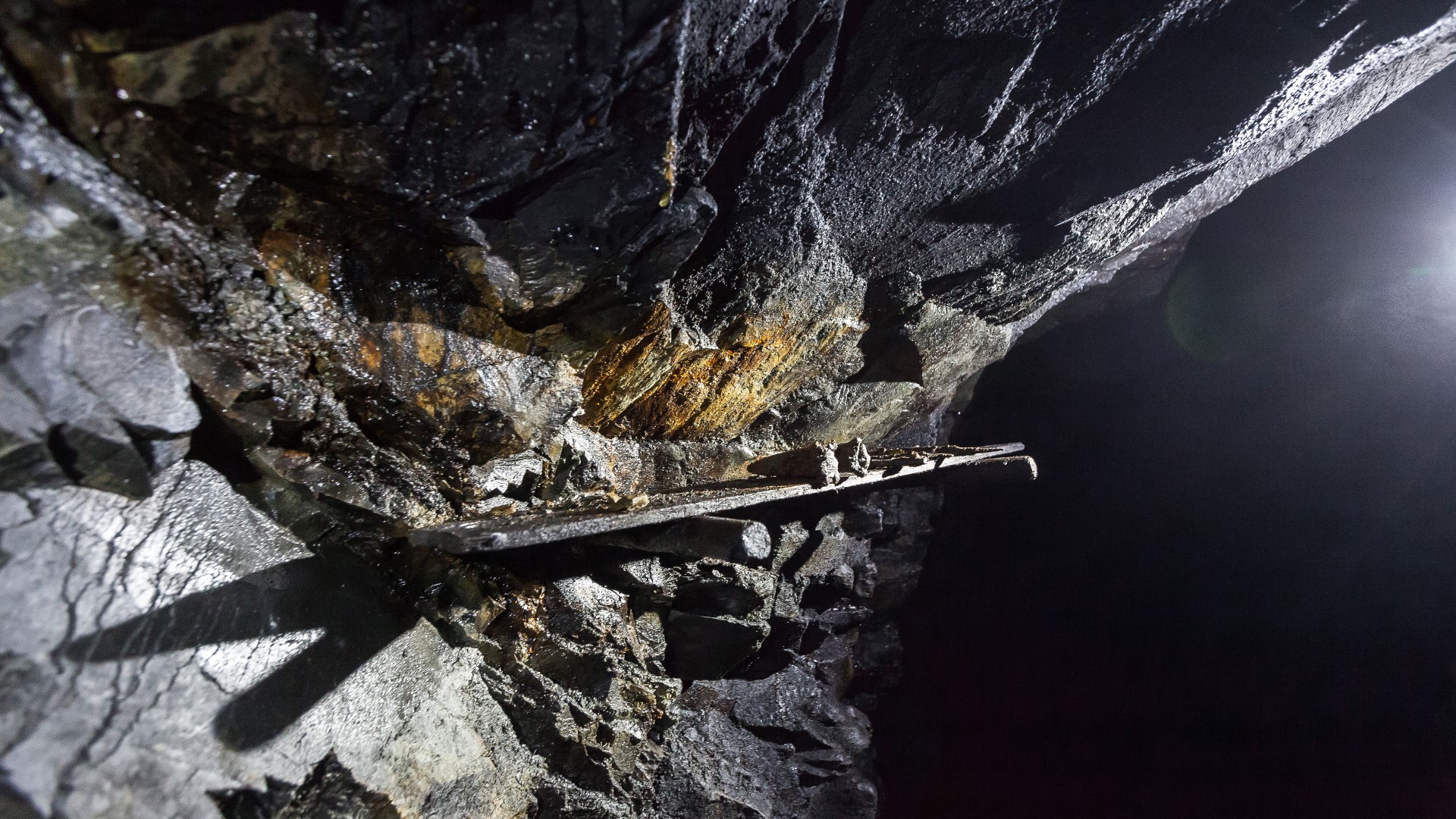 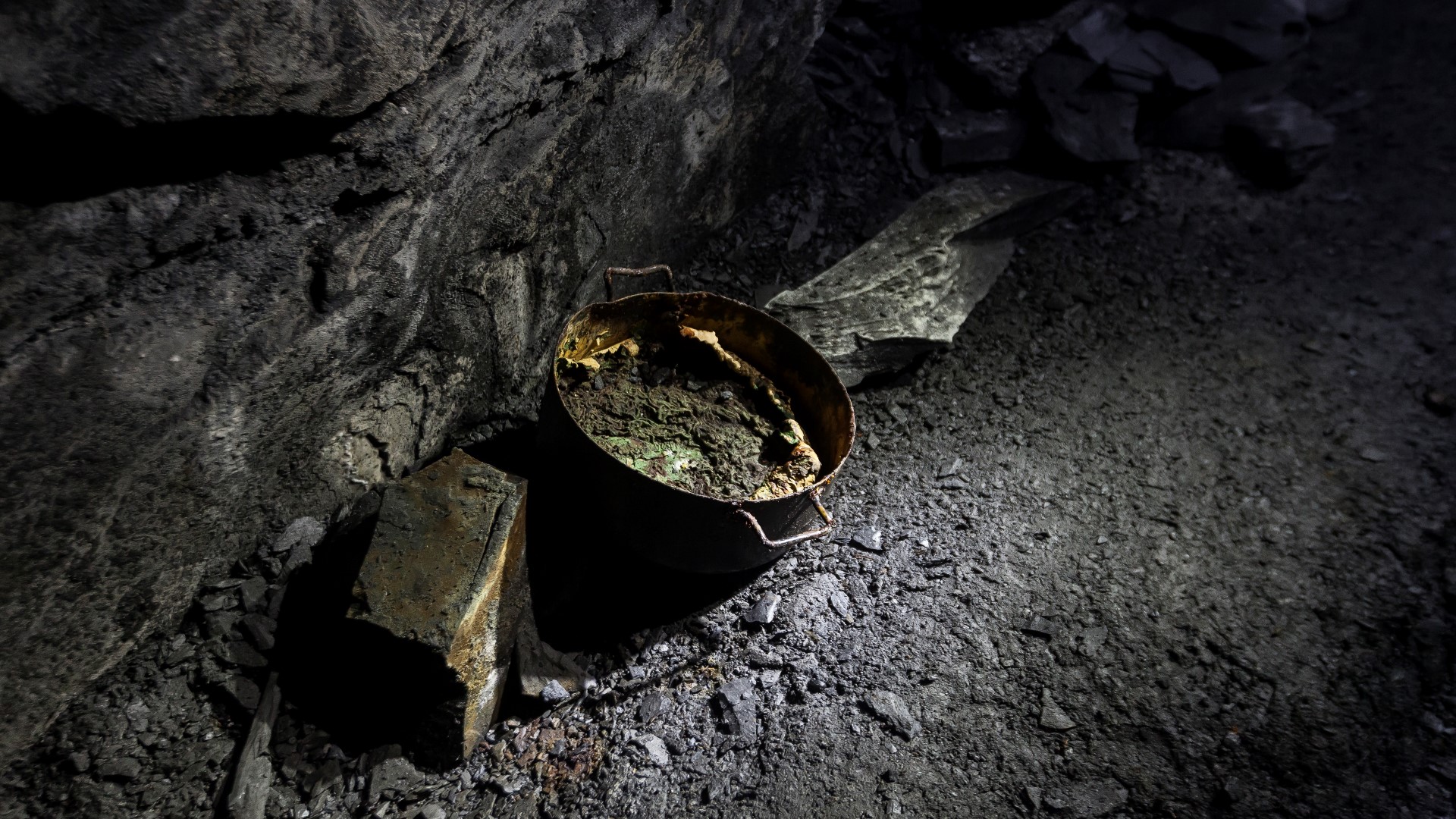 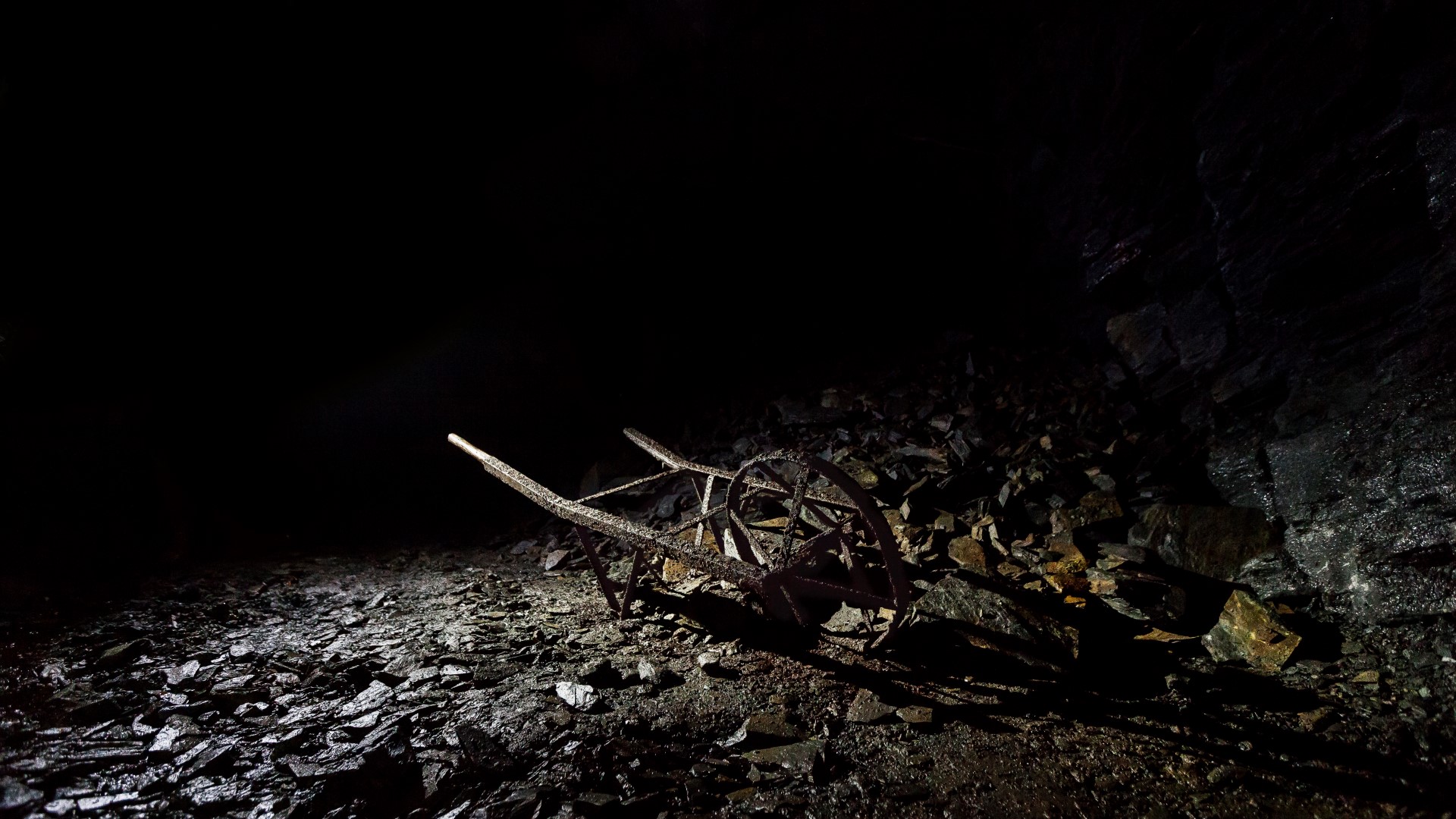 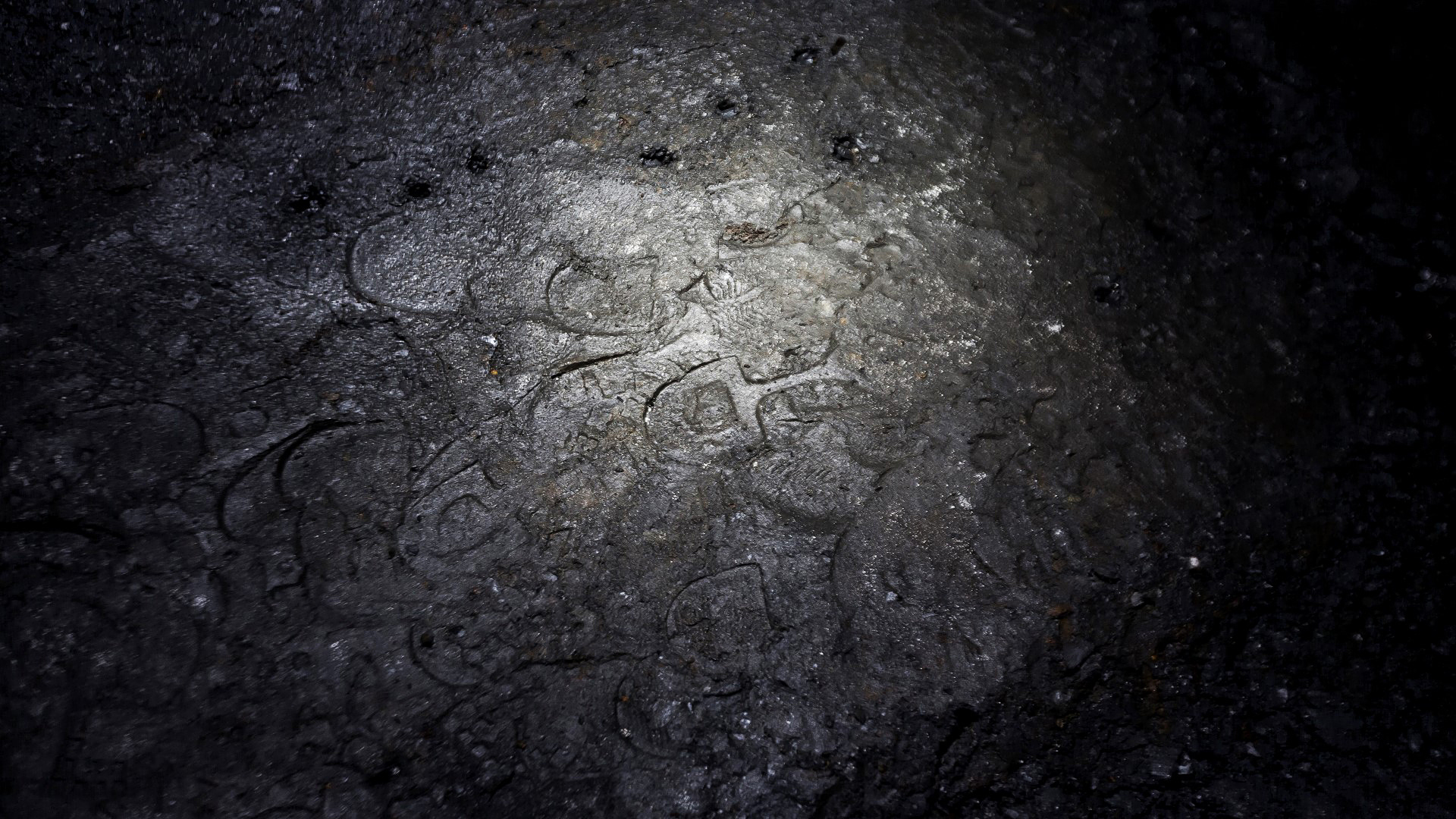 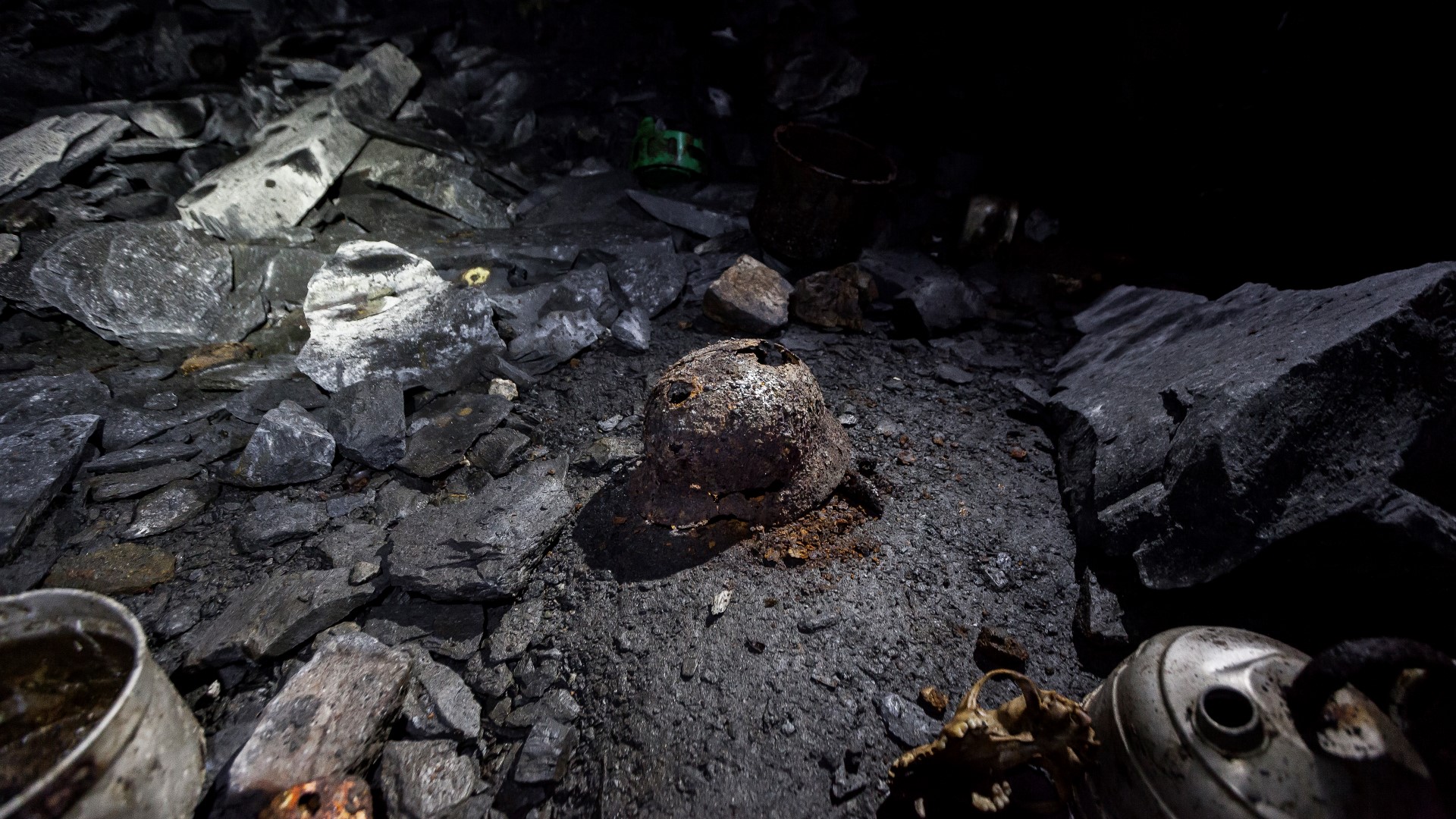 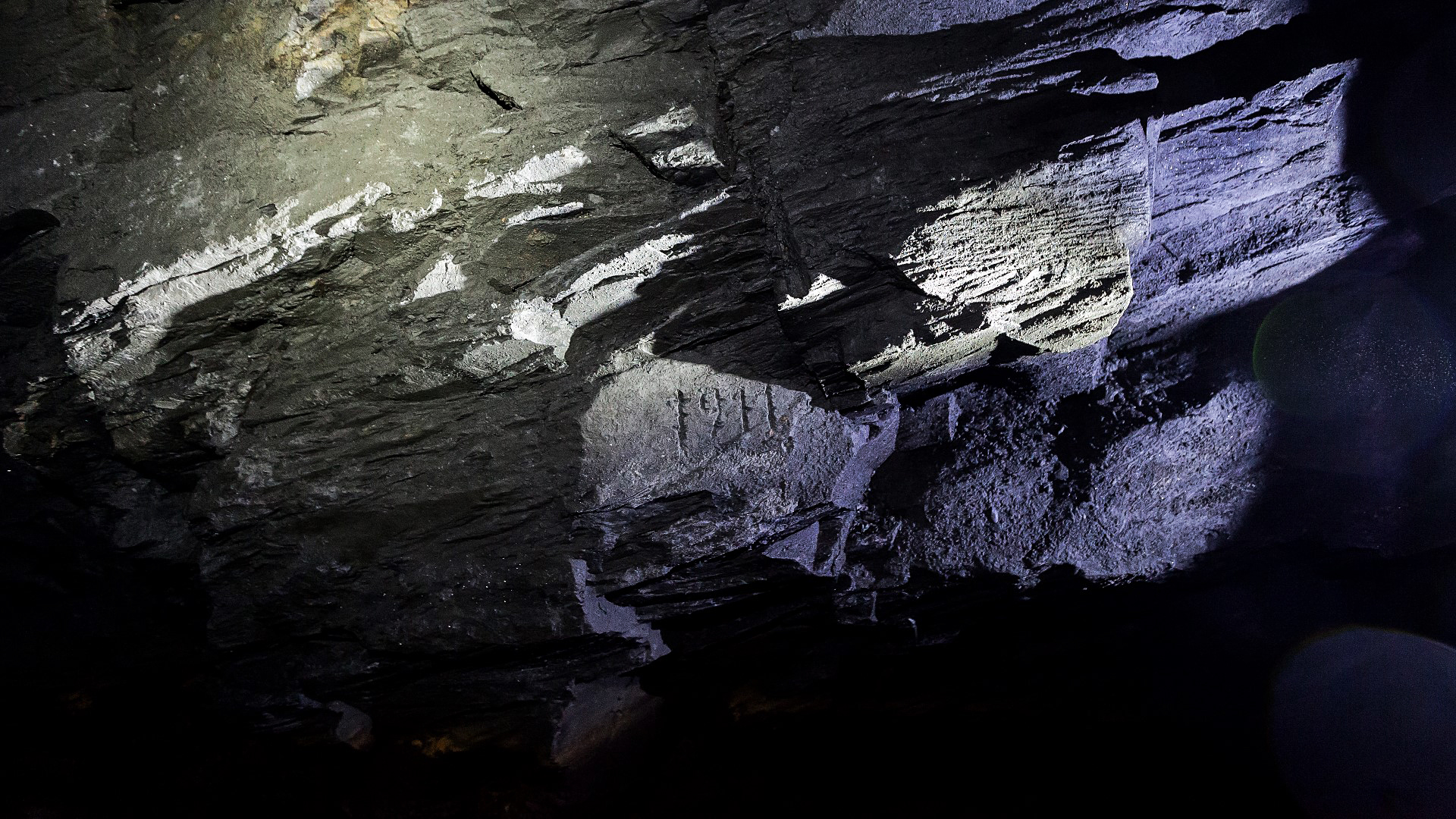 We are already on the way back, when something unimpressive but strange strikes us. Cleanly attached to the rock wall of the tunnel, an unusually high and carefully inserted brickwork blocks the passage into another area. On the ceiling a small hole. On the ground the excavated rock. The hidden tunnel behind it is empty, but very clean and dry. Another puzzle. From the mining point of view such an elaborate brickwork would not find any justification at this point. Abandoned stretches, therefore, “old men” were usually separated by a step of stone up to one meter high or filled them completely. Is it probably the brickwork that the old miner still talks about today? What was the one who broke it? 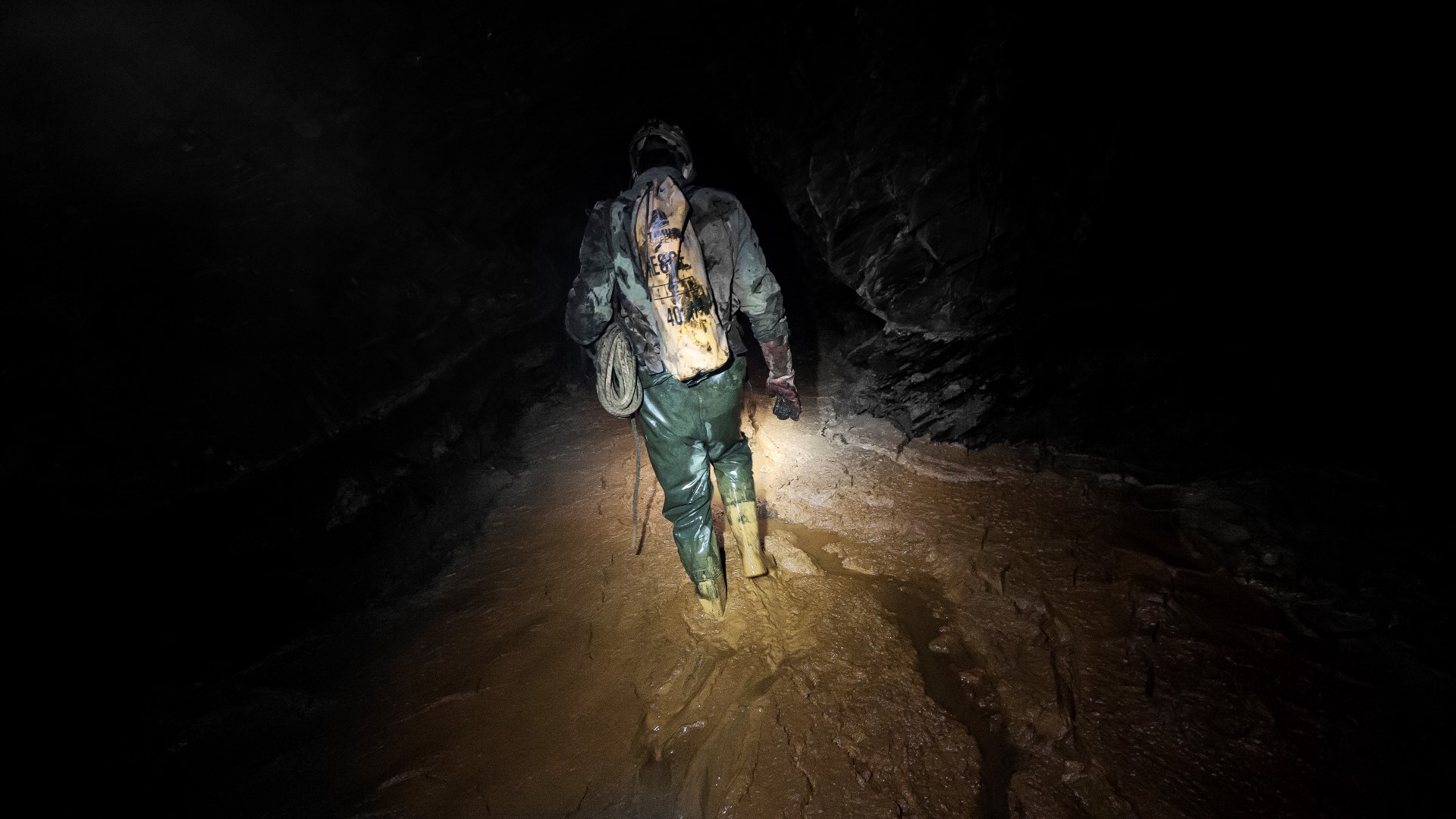 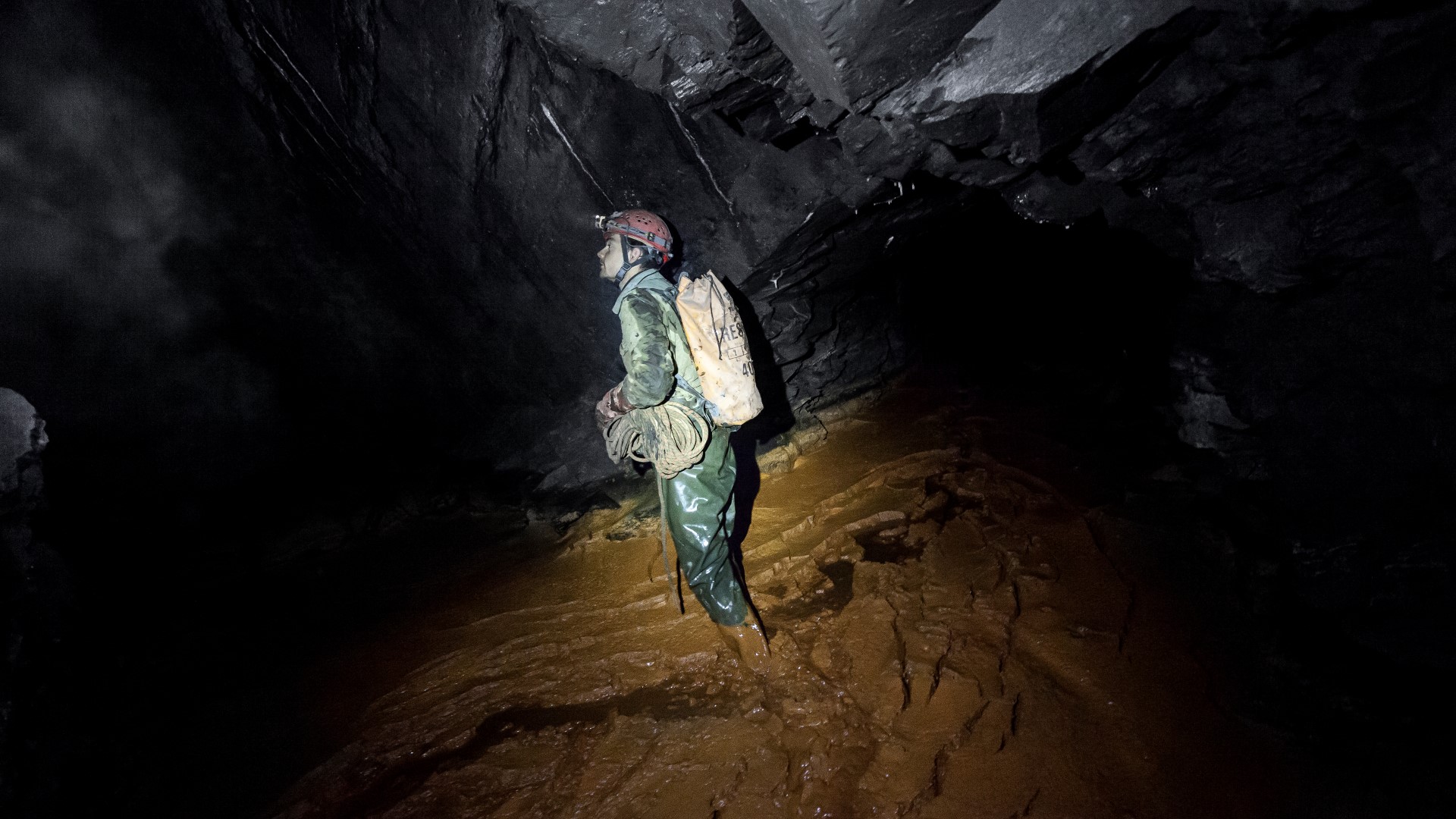 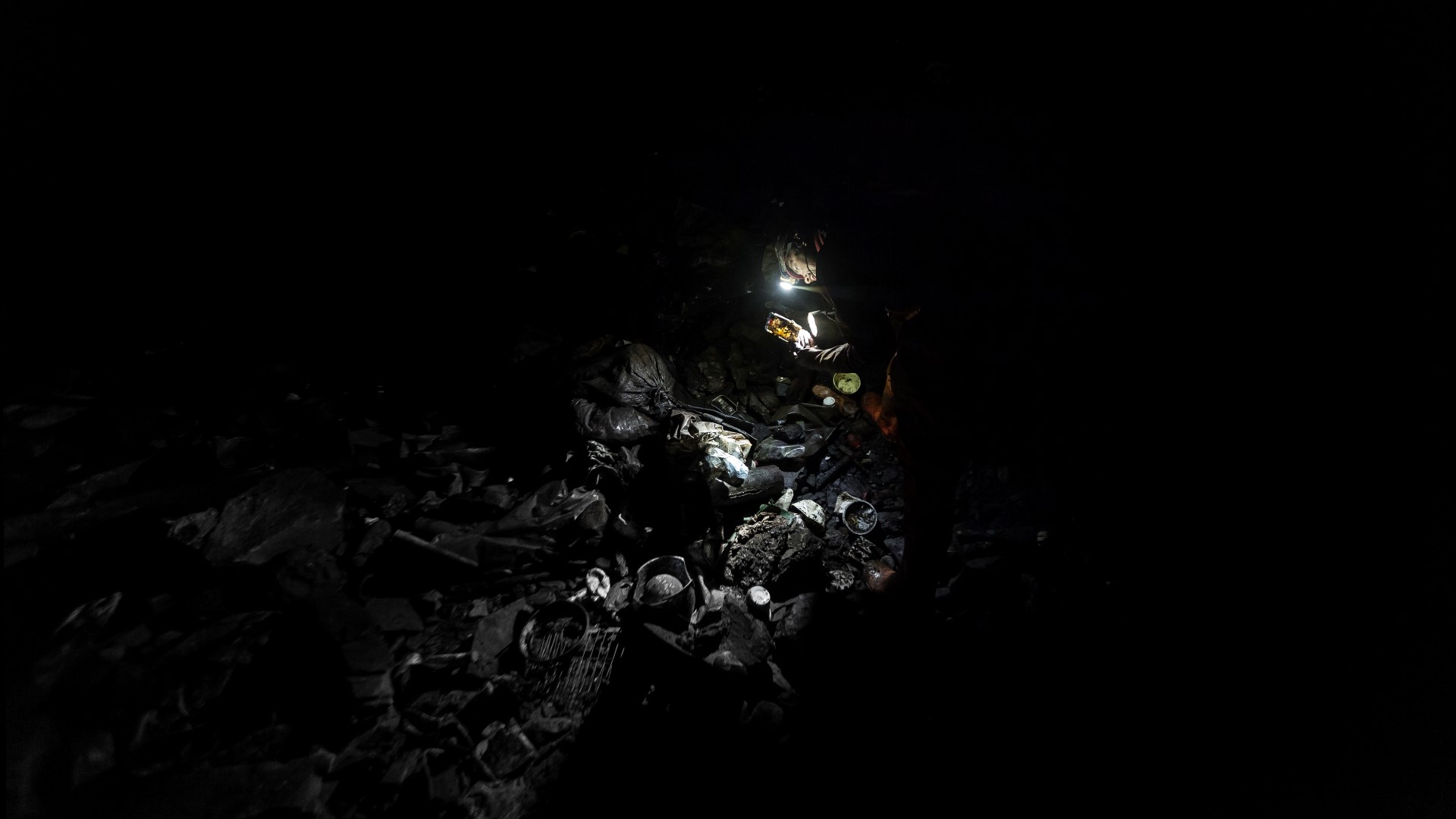 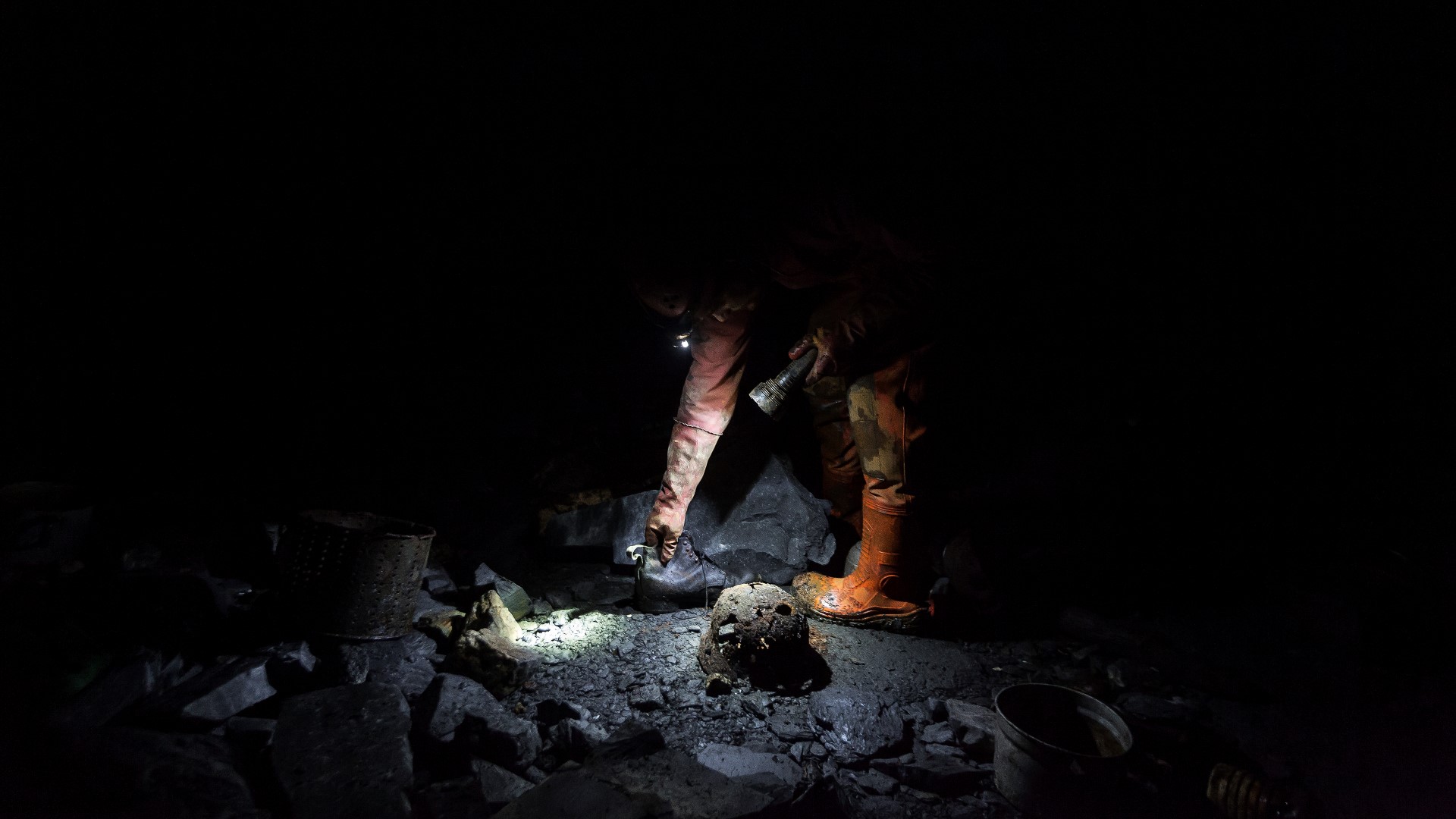 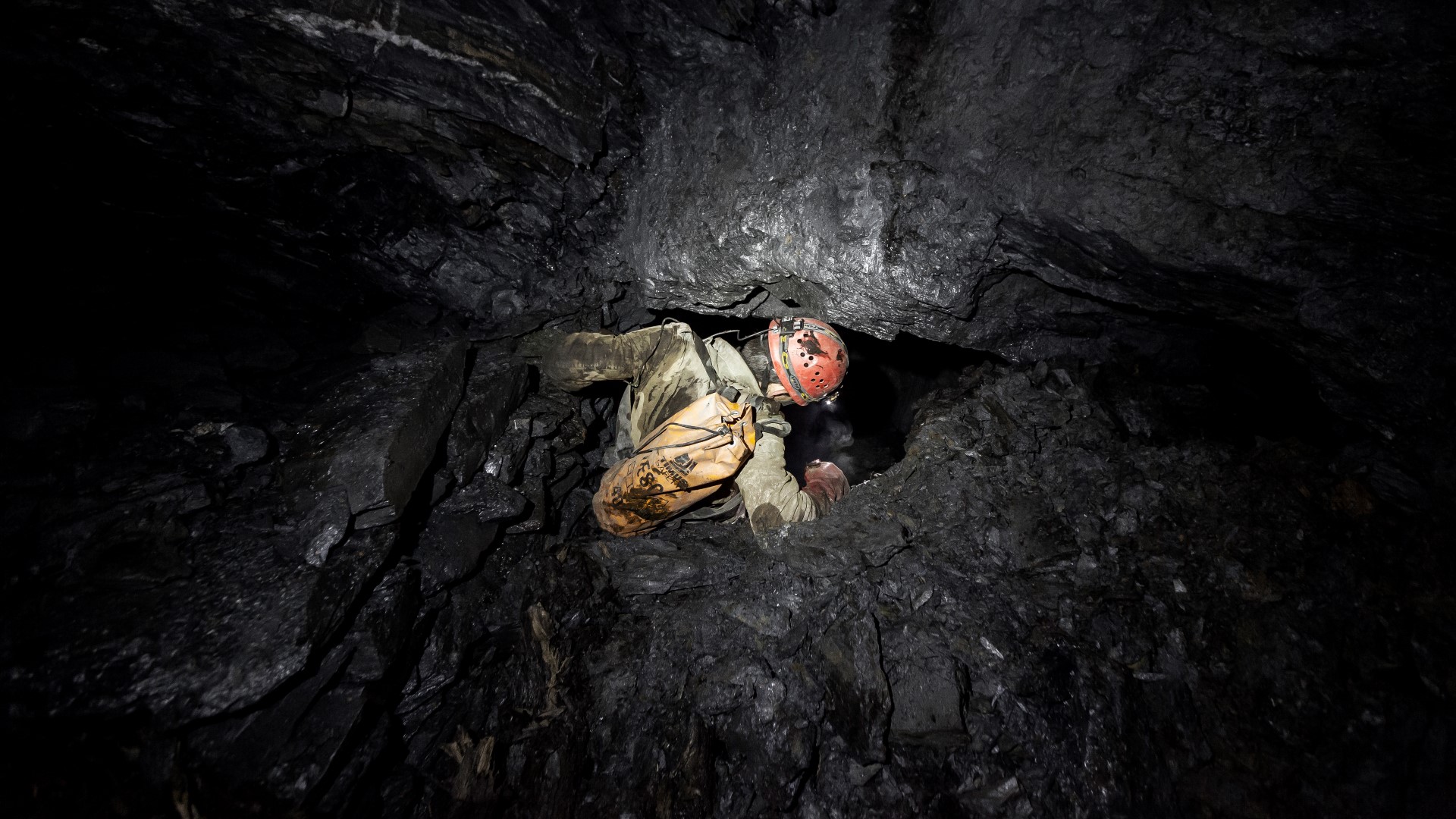 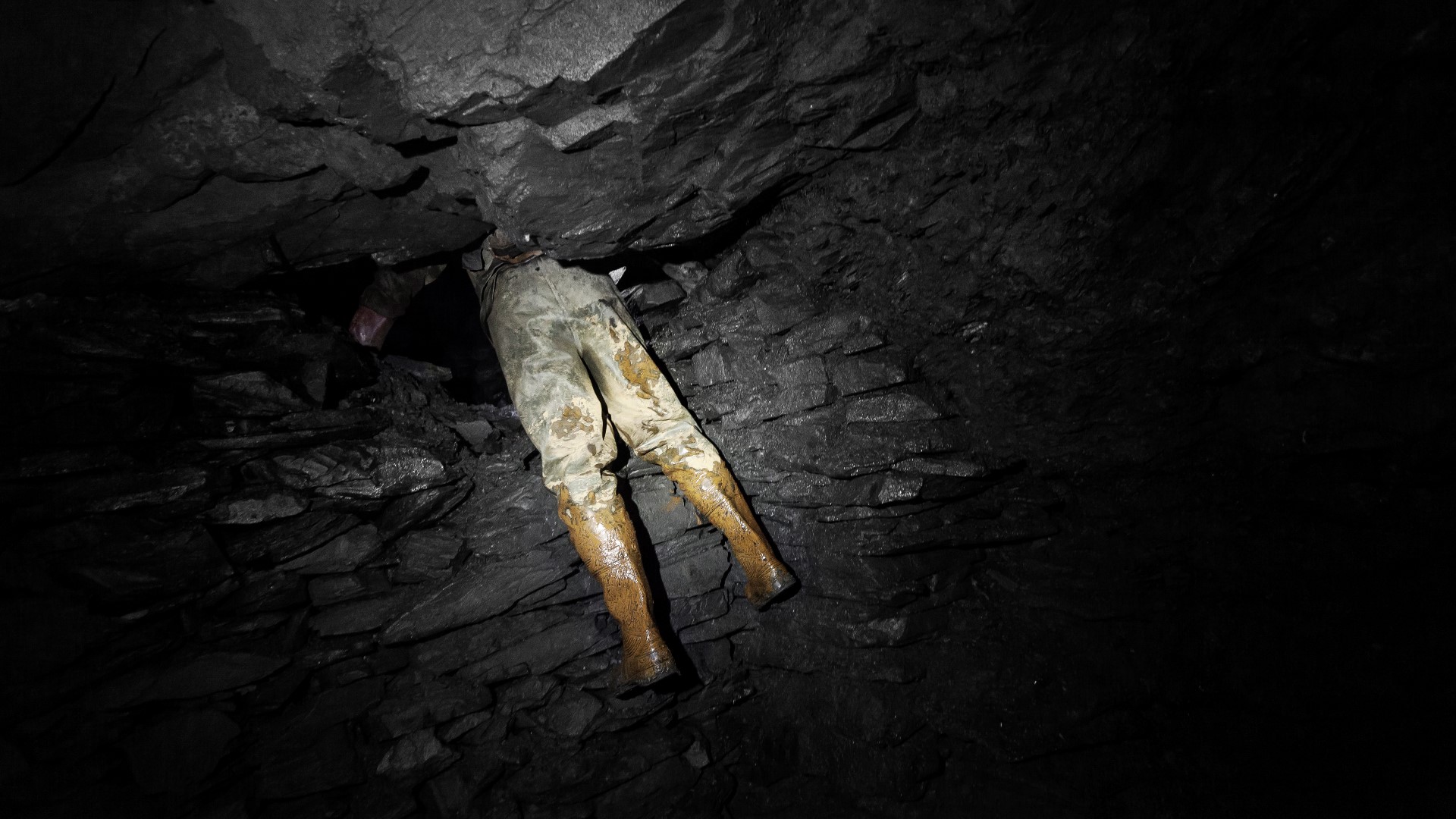 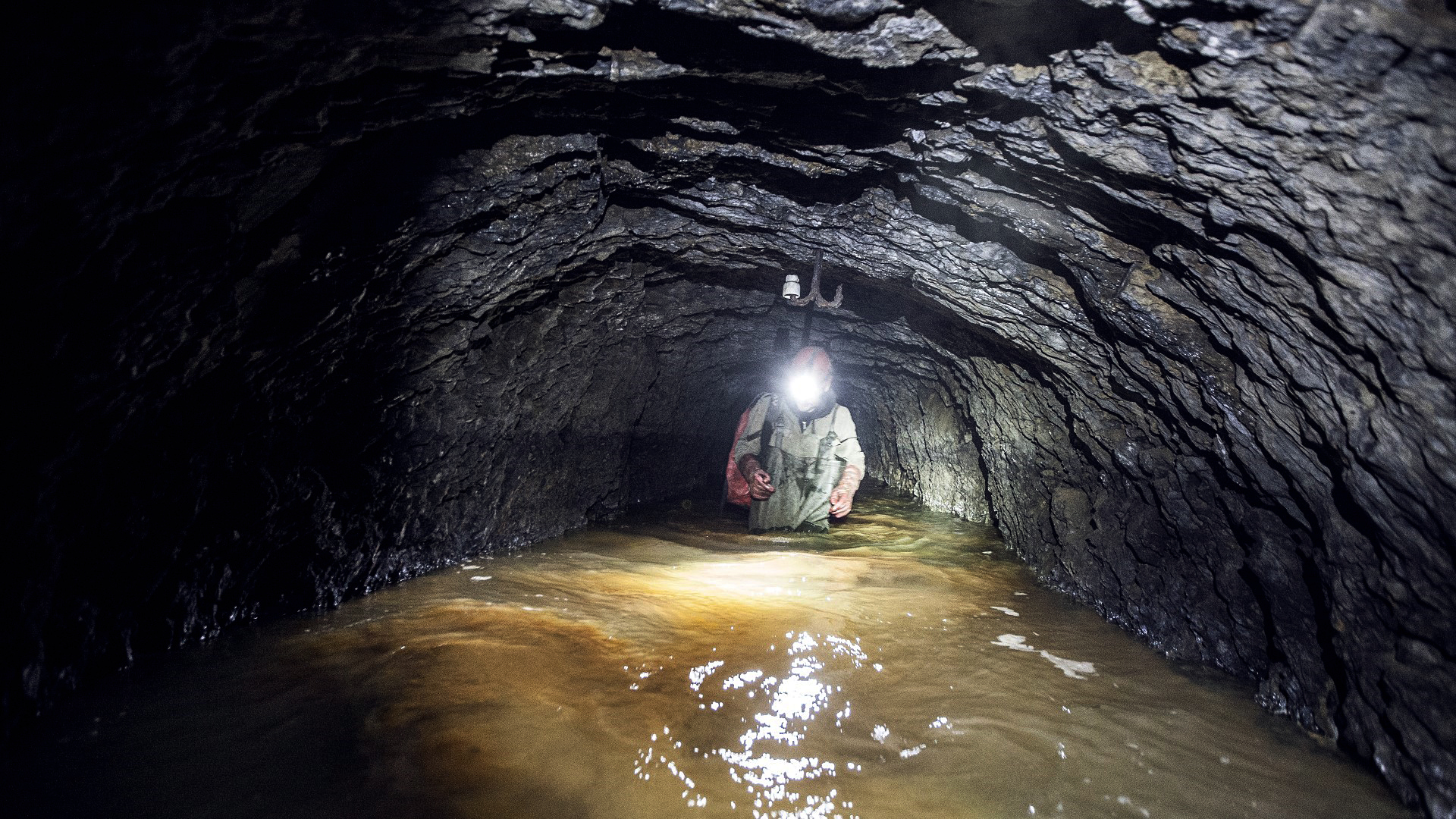